Kingdok was the ruler of the Rat Creatures and a slave puppet of The Hooded One. He was succeeded by King Agak after his death. He serves as the secondary antagonist in the Bone series.

Not much is known about Kingdok's past except that he fought in the great war, and that he ate Thorn's Mother and Father.

Kingdok makes his first appearance in this book. Kingdok wakes The Two Rat Creatures to tell them that since Phoney (the one who bears the star) was last seen in their territory, The Hooded One has summoned them to a high council to explain why this happened, and they go. Kingdok is seen at the council with The Hooded One, who sends every rat creature in the valley to attack Gran'ma Ben's Farm.

Kingdok locates the Two Stupid Rat Creatures who have been in hiding ever since the fiasco at The Cow Race. At first, he appears angry with them, but is actually proud, and gives them a sack of rabbits to eat.

Later, Kingdok reports to his master, The Hooded One, and informs her that the girl who lives with Rose Harvestar, "the old cow woman", is the princess. The Hooded One states that she already knows this, and harshly tells Kingdok to leave her so she can speak with The Locust.

The two Rat Creatures attack Thorn, Fone Bone, and Gran'ma Ben in the forest. Gran'ma Ben is able to pin one of them down, and he starts to spill out information about their plans. Kingdok comes, and calls them traitors for spilling their guts. Kingdok then knocks Fone Bone and Thorn out of the way and picks up Gran'ma Ben with his jaws and throws her deeper into the forest. Kingdok follows her and throws her against another tree. He is about to kill her, when all of the sudden, Thorn comes in and cuts Kingdok's right arm off. He lets off a loud scream of pain, and falls over and faints.

A few minutes later, the two Rat Creatures come and freak out becuase they think Kingdok is dead. They use some leaves to stop his arm from bleeding, and then decide to run away and hide... again. They leave Kingdok and run into the woods. Later, Kingdok recovers and his present when The Hooded One rallies her men to fight. She orders Kingdok to find Thorn and the three Bones and capture. Kingdok wants to confront the Great Red Dragon, but The Hooded One will not allow this and orders Kingdok to his mission.

After the bones go through the rat creature temple, Kingdok appears. When they escape, it is revealed that that he was a hallucination created by the power of the dreaming. When Roque Ja delivers the Bones to Kingdok, Kingdok refuses to give him a proper reward, instead snapping his jaws in the mountain lion's face. As he leads the Bones away, Roque Ja, who is angry about not being rewarded, attacks Kingdok and rips out his tougue while the Bones escape. Kingdok finds Stinky and Smelly, and attempts to knock them and the bones off a cliff. Kingdok says that the The Two Rat Creatures are deserters.

All the Rats believe that Fone Bone has killed Kingdok despite them seeing him being attacked by Roque Ja. When The Hooded One visits Roque at the Eastern Mountains Kingdok is revealed to be alive and well.Roque taunts Kingdok of him being unable to talk. He is shown to be keeping Kingdok's tounge as a trophy. Kingdok attempts to fight him but is pushed back by The Hooded One. The Hooded One makes a deal with Roque to capture the Bones and accepts. He runs off. Kingdok is at the ceremony with Briar(The Hooded One) to summon the Lord of the Locust by sacrificing Phoney Bone. After Briar realizes that she made a mistake Kingdok calls her a discrace in the eyes of the Locust.

As Thorn, Gran'ma Ben and the Bones are escaping the collapsing mountain, Kingdok (who is still on the mountain) chases them downhill, trying to kill them. He forces them into a cave. Gran'ma Ben intervenes and holds him off long enough to allow the others to escape, while the mountain explodes with him on it.

Kingdok was waiting in a cave as Briar's backup plan should The Great Red Dragon come.

When Thorn is about to touch the Crown of Horns, she sees a damaged Kingdok step in front of her. Kingdok tells Thorn to kill him, Thorn disagrees, so Kingdok implies that he ate Thorn's parents while they were alive, making Thorn display a expression of sadness and rage, but Thorn still doesn't try to kill him. Thorn tries to touch the crown of horns, but Kingdok bites Thorn's leg, stopping Thorn from touching the crown. Soon after Kingdok bites her, Thorn gets her sword and stabs Kingdok, ending his life.

Two Stupid Rat Creatures: Kingdok seems to despise them, for they have gotten in the way various times.

The Hooded One: Kingdok is a slave, used by Briar (Alias the Hooded One) to help in the war.

The Lord of the Locusts: Although they have never seen or talked, Kingdok seems to praise him.

Kingdok is a complex character. He is a skilled leader, but somewhat of a coward. He isn't the most merciful leader, though eventually, he grows careless and again sides with his people. At first, he was loyal, a character trait that faded as the series carried on, and he quickly turned into a character that was loyal to no one. His development was summed up by himself with him saying that he was once a mighty and feared king, but now a slave seeking only death.

Kingdok is a gigantic rat creature, who resembles a T-Rex. Over the course of the series, his appearance changes slightly. At first, he appears shorter, only a foot or so larger than Gran'ma Ben or another Rat Creature, and he has two bottom teeth sticking out. However, by the end of the series, he is much larger, about three times his original size, the two bottom teeth no longer sticks out. His fur is purple, which stays consistent throughout the series. His appearance deteriorates over the series. In The Dragonslayer, he loses his arm, in Rock Jaw, he loses his tongue, and in Ghost Circles, the left side of his jaw is jutting out, one of his ears is torn, and the left side of his face is scarred from the massive explosion.

Kingdok is an able fighter, using his jaws to bite and or eat anyone who gets in his way. He also possesses a war club, which he uses until his arm is cut off by Thorn, and Fone Bone takes it. After this, Kingdok is not as mighty and powerful as he was. He did manage to attack and do some damage to Roque Jaw, Fone Bone, Smiley Bone, Bartleby and the Two Rat Creatures. However, Roque rips out Kingdok's tongue soon after, making it difficult for him to speak. In the end, Kingdok is tired of being a slave, and orders Thorn to kill him. As the series progresses, Kingdok's battle prowess seems to decrease.

Kingdok signature weapon was a war club which he lost after Thorn sliced one of his arms off. Fone Bone later took it and kelp with with him most of the time. The club was later destroyed when Smile attempted to use it to defend Phony from Roque Ja, causing it to snap. 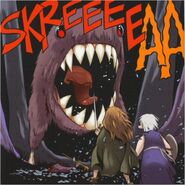 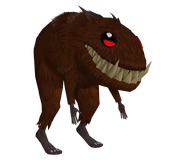