Phoncible P. "Phoney" Bone is one of the main characters in the Bone series published by Jeff Smith. He is the selfish and greedy cousin of Fone and Smiley Bone, as well as the reason he and his cousins got run out of Boneville. He is known for his get-rich-quick schemes, to which the denizens of both Boneville and the Valley have fallen victim on more than one occassion.

Phoney, like his other two cousins, is an orphan. The oldest of the three, Phoney took care of them and focused on protecting his cousins. Eventually, he became a wealthy businessman, but was incredibly cheap and deceitful, even building an orphanage on a hazardous waste landfill. Phoney eventually decided to run for mayor, which Fone Bone believes was only so he could run more shady business deals. Phoney planned a picnic in a park and invited everyone in town. He promised free food (later revealed to be Prune Tarts) to anyone who showed up. Phoney wanted to make a announcement for his running for office in front of the statue of Boneville's founder, "Big" Johnson Bone. He tied a 50 ft balloon of himself to the statue, due to the fact he is Johnson's descendant. However, the balloon broke loose soon after his announcement and chased Fone Bone's first grade teacher, Mrs. Crab-Bone, into the river before Fone Bone and Smiley could let the air out of it. Then the bad prunes kicked in and gave the whole town "the Fast-Track Sallies". Phoney got into serious trouble and his already unstable reputation was shattered, with the current mayor even giving young Bones a holiday off school just to throw rocks at him. Not for the first time, Phoney was run out of Boneville soon after, his cousins helped him get away.

The first book begins two weeks after the cousins left the city. After much bickering, the cousins are separated by a swarm of locusts. It is unknown exactly what happened to Phoney, but he made it into the Valley by spring.

He is guided by a confused Ted to Fone Bone, but runs into Gran'ma Ben. Soon after meeting Gran'ma Ben, he is chased by her on a cow, and stays with her at the house. However, unable to adjust to the simple hardworking lifestyle, continuous arguing with Fone Bone, and almost instantly causing problems, he runs off to the village to gamble on the upcoming Cow Race. He is seen again at the Barrelhaven, where he meets Smiley, and they share a toast. However, he is forced to work for the irritated owner, Lucius, because he is unable to cover his debts with his currency.

Phoney begins working as the chef of the tavern, and begins his plans to manipulate the Great Cow Race, foreshadowing the second book. At the end, he is confronted by The Hooded One, who is searching for him. He is warned that the Hooded One will return for him, and she disappears. At the end, Phoney is reunited with Fone Bone, who comically begins to strangle him.

Up to his tricks, Phoney uses Smiley to make people bet on "The Mystery Cow" for the Great Cow Race, an annual event held at the Spring Fair involving racing cows. However, the Mystery Cow is simply Smiley in a cow suit, and Phoney is trying to get out of his debt and "get rich" from a multitude of animals and eggs. Lucius, however, catches on that the villagers might be getting scammed and tells the villagers that they need to see the Mystery Cow before the race. Once again, Phoney is ahead of them. Hiding Smiley in an old shed, Phoney is able to create a racket large enough to fool the villagers that his cow is genuine. However, Phoney's greed is his unraveling. Right before the race, Lucius bets his entire bar on Gran'ma Ben to win, knowing very well that even with his profits, Phoney would be unable to pay off the enormous debt. Phoney informs Smiley that he has to win the race due to the bet and gets into Smiley's costume with him. Unfortunately, Phoney causes Smiley to fall into a ditch filled with Rat Creatures, ultimately causing them to collide with the race. Gran'ma pulls ahead to win the race, and an angry mob mauls Phoney with eggs in response to being cheated out of their savings. Lucius informs Phoney and Smiley that in order to work off their debts, they will work for him and Gran'ma Ben until the summer's end.

Phoney is forced to do chores at Gran'ma's farm, and makes fun of Fone Bone's pathetic attempts at love poems. When he goes off with Lucius and Smiley to Barrelhaven, the group is ambushed.

In Ghost Circles, Phoney argues with Fone Bone over who's fault it is for not wanting to go home. While the cousins, Gran'ma Ben and Thorn walk across a bridge, Phoney yells when Fone Bone slips off and is relieved when Thorn grabs Fone Bone's arm.

Phoney Bone hears that Atheia is rich in gold. Him and Fone Bone get a job chasing giant bees out of the market. Later, he attends a meeting with Gran'ma Ben and Thorn, and is arrested the next morning alongside Smiley by numerous Vedu soldiers.

At one point he tries to get the treasure in the well in Atheia while Smiley fetches Bartleby. When Bartleby is found out he holds a ladder for Bartleby to run up, and then he tries to get Fone Bone to leave with him, but is rejected. Later, Gran'ma Ben forces him to go with her to try and stop Briar, but when they get to the end of the tunnel, they are captured immediately. Since Briar's focus is on Gran'ma Ben, Phoney manages to slip away unnoticed. Later, he returns with reinforcements, only to find out that he "missed the war" and is disappointed, although he still thinks he's "a hero". Just before he goes to Barrelhaven, he gets "his" haycart back and finds the treasure still hidden inside the hay. However, he pesters Fone Bone to make his decision on whether to stay or go, and is anxious when he keeps seeing snowfakes. He attends Lucius's burial and stays in Barrelhaven all winter due to the snowfall. In the spring, when they cross the raging river, he warns Smiley not to let the "supplies" fall out of the haycart. When they are on the edge of the desert and about to leave, he finds out all the treasure has been emptied out and replaced by "those hard, stuffed bread thingies" and is visibly upset. Gran'ma Ben gives him the coins with his face stamped on them saying "nobody around here wants 'em anyway." He's still upset because he had an "empire to rebuild" and it's only a few coins. He finally reveals that he doesn't like hard, stale bread thingies but they are the only food in the desert. He asks Smiley to hand him one and Smiley request a gold coin in payment, and Fone Bone tells Phoney to give him one, saying "We're out in the middle of th' desert" in reference to Out from Boneville.

Quest for the Spark

Phoney Bone does not appear in Quest for the Spark, though he is mentioned on more than one occassion.

Fone Bone: Fone Bone's relationship with his cousin is heavily strained. Fone Bone rarely trusts him, finding him just as greedy, selfish, and irritating as most of the other characters. He loathes having to save him from the problems he had caused, and although the two are almost always quarreling over something, deep down they both care for each other. Phoney is protective over him, defending him from the Hooded One, who planned to have him killed after he woke The Great Red Dragon.

Smiley Bone: Smiley is sometimes Phoney's partner in crime. Smiley often dislikes what Phoney does, aware of his selfishness and greed, but enjoys participating in his cousin's schemes for fun. Phoney often finds Smiley's simple-minded behavior extremely irritating, which is actually the reason Fone Bone brought Smiley along when they got ran out of Boneville. Smiley enjoys pointing out to Phoney how it is his own fault his plans backfired.  However, as shown by his concern when Smiley collapses from starvation in Ghost Circles, Phoney does care for his well-being, just as much as he does Fone Bone.

Thorn Harvester: Of all the denizens of the Valley, Thorn seems the most tolerant towards Phoney's troublesome behavior (though they do not interact often throughout the series), having protected him from other villagers in Old Man's Cave and willingly searching around for him after he had left for town in Out from Boneville.

Gran'ma Ben: Gran'ma thinks of Phoney as a troublemaker and doesn't like him at all, only seeming to help her because of his cousins' concerns. She has mustered the patience, though, for his pessimism and grumpiness, as seen during their time spent together in Old Man's Cave.

Lucius Down: Lucius despised Phoney from the beginning, and Phoney wound up working for Lucius after finding out the hard way that the Valley denizens don't use dollar bils in The Valley. He thinks of Phoney as dishonest and crafty, and often enjoys doing things just to annoy and torture him.

Valley Denizens: Phoney is well-known throughout the Valley for his troublesome behavior, by critters and people alike. He is on terrible terms with the villagers of Barrelhaven because of the times he has tricked them for the sake of personal gain.

Phoney is extremely greedy, arrogant, lazy, patronizing, selfish, cowardly, bad-tempered, clever, somewhat idiotic, and devious. He will let no one get in the way of his schemes, even his own cousins. However, he still cares deeply about them and will risk his life to defend them if necessary. Phoney was not used to life outside his affluent lifestyle and had much trouble adjusting to the customs of the Valley.

Phoney will stop at nothing to get rich, and his excessive arrogance always makes his plans go wrong. Phoney will often do things without consideration for others or thinking about what could happen if he fails. He refuses to accept that he made a mistake and will use others as a scapegoat. Phoney is unable to understand when he is in real danger until it is almost too late, and he never looks at how his plans could go wrong.

Phoney is identical in height to Fone Bone. He is always seen wearing a black, long-sleeved shirt with a yellow star in its center. He always has a unibrow hovering above his head to match his constant grumpiness, except when his eyes are popping out. Rare occassions, including panels in Out From Boneville and Old Man's Cave, have seen Phoney's unibrow splitting, and his look thus more closely resembling Fone Bone's. He bears a striking resemblance to the Wang version of Dot Warner from Animaniacs. 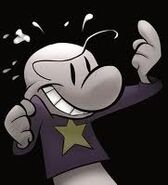 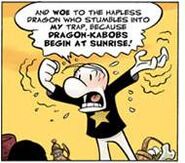