Rose Ben, previously known as Rose Harvestar, also called Queen Rose or Gran'ma Ben, is one of the main characters of the Bone series by Jeff Smith and main protagonist of its prequel Rose. She is an inhabitant of The Valley, as well as the penultimate queen of the Old Kingdom and former princess of Atheia. She is a mentor to her granddaughter Thorn.

Rose Harvestar was the second child born in her generation of the Atheian Royal Family, after her elder sister Briar. She was favorited among many over Briar as a child, whose Dreaming Eye was believed to be blind.

During her teenage years Rose grew up in the Palace of Atheia and showed much potential of becoming a Dream Master, such abilities including her being able to communicate with her dogs through thought. When she went to Old Man's Cave to be tested she accidentally released a rogue River Dragon named Balsaad. When she set out to kill Balsaad after learning Briar had intended to release Balsaad on the valley, The Great Red Dragon told her to take life of the first living thing she met after killing Balsaad to restore balance to the Dreaming. When Rose confronted the roque she received a giant Pawan attack sword from a Pawan Warrior and his friend which she used to cut Balsaad into pieces. Even though he kept healing due to the Lord of the Locust's power, Rose defeated Balsaad at his river, where the current was very strong. As she cut him into pieces the water swept his body parts away from each other, rendering him unable to heal himself and resulted in his death. The first living thing that Rose came upon was Briar, but she spared her sister out of family loyalty and killed one of her dogs instead.

The Great War and Nights of Lightning

During the war between the Rat Creatures, Rose had been queen, and became mother to a daughter, Lunaria, from an unknown father. Rose was known as a skilled military leader, and built the walls surrounding Atheia. Sometime later, Rose handed the throne willingly to her daughter, and began working to make an alliance between dragons and men during the vicous Nights of Lightning. However, Atheia fell and her family barely escaped to Deren Gard, where they were betrayed by Briar. Rose took her granddaughter Thorn to be protected by The Great Red Dragon, and returned to the scene. When she returned to aid her family, it was too late. Lunaria, Thorn's Father, and Briar were all dead. The distraught Rose buried her family and continued to fight in the Great War. The Great Red Dragon helped make a treaty with the Rat Creatures, delaying another war. Rose searched for a place where no one would know her true identity. She found a home nearby Barrelhaven, and raised Thorn under the alias Rose Ben, keeping Thorn's past a secret, hoping to protect her. She lived there quitely, refusing to tell Thorn her identity despite continual pleas from The Great Red Dragon, hoping to disappear from history.

Gran'ma Ben (as she is known) is bringing home her cows when Ted the Bug comes with a Bone known as Phoney, and this is her first time seeing him. She asks him if he wanted to ride one of her racing cows, and Phoney shouts that he doesn't. She advises Ted to leave, warning him that she will tear Phoney "apart from the inside out." She puts Phoney onto a cow and makes it run toward home, and races the cow while Phoney hangs on for dear life. When the cow is very close to the house, she stops the cow by its tail and Phoney flies off it into the dinner. She tells Thorn that she can't "keep" Phoney and Fone Bone, who is also at the house, because Phoney was unpleasant. She then changes her mind after Thorn says they aren't pets and says they can stay in the barn.

The next day, Gran'ma is missing her bloomers and asks Fone Bone about it, and he says he knows nothing about it, but she tells him to keep an eye on his cousin. That night, after Phoney left for Barrelhaven, she tells Fone Bone and Thorn that the rat creatures surrounded the farm. She tells Thorn and Fone Bone the plan "When I say run . . . you run!" She then punches a hole in the wall, starting to fight the rats, and yells to run, also saying that she "fought the rats in the big war!"

Later, after Thorn and Fone Bone turn up with Ted and the Great Red Dragon, Gran'ma starts hitching up the cows to a cart to go to Barrelhaven and asks Fone Bone why he and his cousins are in the Valley. He tells her that Phoney decided that he was going to run for mayor of Boneville. He held a picnic on the banks of the Rolling Bone River and had prunes for everyone and a big balloon of himself by the statue of "Big" Johnson Bone, the town's founder. The balloon broke loose, though, and chased people into the water. Then the bad prunes kicked in and the townspeople ran Phoney out of Boneville (not for the first time).

Later, she falls asleep listening to Fone Bone talk about Moby Dick, and when they get to Barrelhaven, Fone Bone finds Smiley Bone and Phoney again (whom he starts shaking).

Gran'ma Ben is preparing to compete in the Cow Race for the Spring Fair, but nobody is betting on her because Smiley and Phoney Bone spread rumors that she was too old to win, in order for people to bet on their cow, The Mystery Cow. Phoney Bone's plan was to let Gran'ma Ben win so the people who had bet on the Mystery Cow would lose the bet and make them rich. However, when Lucius bets the Barrelhaven Tavern on Gran'ma Ben to win, Phoney and Smiley make it their goal to beat her.

At first, The Mystery Cow stays ahead of Gran'ma Ben, but then it tumbes off the cliff, revealing Phoney and Smiley inside. Gran'ma Ben then overtakes them and goes on to win the race. When the villagers realized they had been tricked, Gran'ma Ben and Lucius save Phoney, telling the angry villagers that they will pay the difference for all the bets.

Gran'ma Ben, Thorn, Lucius, and the Bone cousins then go back to the farm to repair it from the Rat Creature attack.

Gran'ma Ben tells the Bone cousins to make dinner, but they faint after they realize they have to decapitate a chicken, leading Gran'ma to say "Hmph. City Boys!" When the farm has been repaired, she bids farewell to lucius, Smiley, and Phoney. She gives Fone Bone the choice to go with his cousins, but Fone Bone decides to stay.

during the events of this book, Rose goes missing.

Rose, Thorn, and the Bone cousins have all sneaked into the ancient city of Atheia. However, as former queen of Atheia, Rose Harvestar must hide her and Thorn's identity from Tarsil's guards, who have corrupted the old kingdom and made the worshipping of dragons illegal. She works with old masters of dreaming in order to figure out a plan to save the Valley from the Locust.

Rose Harvestar is on the parapet when the battle between the Rat Creatures and Pawan forces against the Atheians begins. During the battle, her identity as the former queen of Atheia is exposed, however, many of the guards are still loyal to the old kingdom, and follow her orders. Towards the end of the war, she, Phoney Bone, and a group of guards go up onto Sinner's Rock in order to ambush the enemy, however, Briar had known her plans all along, and traps them. A bloody battle ensues, and Rose narrowly escapes death from Briar due to Lucius's intervention. At the end of the book, she as well as Thorn, the Great Red Dragon and Ted see the Bone cousins off on their journey back to Boneville.

Quest for the Spark

Gran'ma Ben has the glitchy feeling, an omen of bad things to come. She then hears a scream and runs towards it. Thorn's handmaiden fearfully explains that for some reason, Thorn won't wake up. Despite all attempts, Gran'ma Ben is unable to wake her granddaughter. While trying to get help, she discovers that the Veni-Yan and dream masters have all fallen victim to the strange spell. While escaping Atheia, Gran'ma Ben loses the strength to stay awake and falls victim to the spell of the Nacht.

Gran'ma Ben is a tough, strong-willed, wise, confident, and somewhat bitter woman. She is a stern mother figure to Thorn, and is extremely protective of her. She is very proud, making her easily offended.

Thorn is Rose's only granddaughter and living descendant, and Rose protects her fiercely. She immediately rushes into the fray to protect Thorn and Fone Bone from the Rat Creatures when they attack the barn. However, when Thorn discovers that she is the future queen of Atheia and a Veni-Yan Cari, she and Grandma Ben have a feud, and Thorn leaves her, saying that she can't trust her anymore. When they reunite at the end of Old Man's Cave, their relatuionship goes back to normal, although they do argue about where to go. In Crown of Horns, Grandma Ben is overjoyed to see Thorn safe. She later reprimands Phoney Bone for sending her daughter off to Tanen Gard on a complete gamble. When Grandma Ben succumbs to her wounds at the end of the war, Thorn is shocked and worried, showing a deep bond

Grandma Ben was originally suspicious of Fone Bone, calling him a "pet" and making him sleep in the barn. She also lectured him about waking up the dragon. However, she protects him when the rat creatures invade their farm. However, when the Rat Creatures start breaking the treaty, she blames Fone Bone because he woke the Red Dragon. However, she later admits that it wasn't his fault, that the Rats had been breaking the treaty before he arrived. However, Fone Bone leaves her to accompany Thorn, questioning Grandma Ben's motives. Later, their relationship becomes more normal, with Grandma Ben reprimanding Fone Bone for his naivety several times. However, in Crown of Horns, Grandma Ben tells Phoney Bone that he has sent his cousin to his death, showing that she does care about Fone Bone.

As with most of the characters in the series, she does not get along with Phoney due to his rudeness.

Rose has a very deep relationship with Lucius, owner of Barrelhaven Tavern. He had always been close to the royal family up to the fall of Atheia, where he was a royal guard. He and Rose are seen being sweet with each other throughout the series, up until his death while saving Rose from Briar.

Rose has white hair, which was red in her youth. Although she looks like merely an old woman at first glance, she is incredibly fit, especially for her age. She is usually seen wearing a black dress down to her knees with elbow-length sleeves under a white apron, and green flats although she wears a purple cloak sometimes. 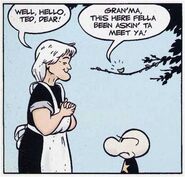 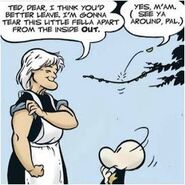