Ted the Bug is a planthopper who has appeared throughout the Bone series. He is the first creature that Fone Bone encounters in the valley. He is a friend of Fone Bone and the Great Red Dragon.

Ted first encounters Fone Bone immediately after his separation from his cousins and just prior to the fall of the snow. Whilst he is initially hostile to Fone Bone he soon takes him under his wing and acts as a guide.

Later on Ted meets Phoney Bone who helps him avoid incineration by the red dragon.

Ted appears to Fone Bone and convinces him to write Thorn a love poem to sweep her off her feet and leaves him to his work.

Ted comes to Fone Bone and reveals he destroyed the poem he previously made in The Great Cow Race. After Gran'ma Ben reveals her and Thorn's heritage, Ted reveals to have full knowledge on this already.

Ted comes to Phoney after he hears that Phoney he was gonna slay a dragon, Phoney convinces him he was fooling the villagers of Barrlehaven. Whether Ted did this on purpose, or by stupidity he has The Great Red Dragon actually go into Phoney's trap, foiling his plan to go to Boneville

Ted finds Fone Bone and Smiley lost in the woods and informs the two that the Rat creatures have been attacking villages wheen they were in the eastern mountains.

Ted had appeared in the prologue where he sees a dying Jonathan Oaks. Jon tells Ted the dragons have gone underground for good. Jon also tells Ted of Luicus's treachery as he was seen in the arms of the Hooded one when the rat creatures attack, Ted convinces Jon Lucius was no traitor, and leaves Jon as he dies. Ted assisted the villagers at finding Lucius, who was in Conkle's Hollow after the ghost circles had spread.

Ted had assisted the Veni-Yan warriors and the villagers find their way to Atheia, having the ability to see past the ghost circles.

As Fone Bone says, Ted appears to look like a green leaf.

Ted appears to be quite friendly, and knows a lot more than people believe he does 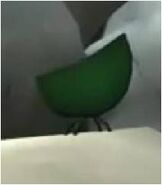 Ted the Bug in Out From Boneville game. 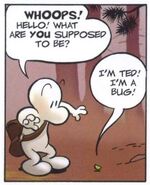