The Great Red Dragon is a guardian of The Valley and a protagonist in the original series. He acts as Fone Bone's personal guardian and tries to embarrass him with Thorn in most of Out From Boneville.

The Great Red Dragon is a son of Mim. When she was possessed by the Locust, he fought against her in a vain attempt to control her. When he was unable to stop her, he and the other dragons turned her to stone, trapping the Locust inside her.

He helped Rose beat a evil river dragon and went to Old man's cave in the past, and some how let her down in some past.

The Nights of Lightning

The Great Dragon first appears when The Two Rat Creatures try to eat Fone Bone while he is sleeping but the dragon appears and saves him. The rats then go after him again chasing him through the forest while he was babysitting the Possum Kids and the dragon then appears. They run away and, strangely enough, he knew that Fone Bone was babysitting the possum kids and knew where they were. When the rat creatures attack Gran'ma Ben's Farm the rat creature chase Fone Bone and Thorn deep into the forest. At the last minute, Dragon with Ted comes and saves them. The Dragon brings Thorn and Fone Bone back to the farmhouse, now destroyed. Gran'ma Ben and The Dragon have a short confrontation. It is obviously revealed that the the two know each other and The Dragon then goes off with Ted.

The Dragon had appeared in Thorn's dream, when she was taken into a cave full of other dragons and wakes up from the dream. After the riot Phoney and Smiley caused, Smiley wandered if the Dragon would protect them from the rat creatures, Luicus believed the bones just believed in a fabled story and drove off. Fone bone looks into the woods and finds the dragon staring at him, thus feeling safe.

When an entire rat creature group surrounded Thorn, Gran'ma Ben and Fone Bone, Fone bone cried out for the dragon's assistance and had drove them off.

Phoney Bone tried to capture the dragon and almost succeeded in killing him, but Thorn stopped him from killing him.

According to Gran'ma Ben the council of dragons made a final decision to stay underground for good, leaving only the valley people to fend the valley. After Roque Ja took both, Phoney and Thorn and knocked Fone bone unconscious, The Dragon appears to Fone bone in his subconscious and explains he can no longer be of any more assistance to him due to the council's decision keeping the dragons underground to dream and Fone bone must save Phoney and Thorn in his absence

The Dragon only appears in Fone Bone's dream in this volume. It is Fone Bone's Moby Dick dream from Eyes of the Storm. It continues off from where it left off, Fone Bone has no choice but to go underwater and there he sees the dragon whose mouth Fone Bone goes into. He then wakes up back to normal which Fone Bone finds strange.

After Fone Bone touches the crown of horns all of the dragons have awakened from their slumber and are very angry at him and Thorn for waking them. The Dragon appears to them and has them climb on his back, due to the other dragons being blinded by rage if caught, they would be ripped apart. Once escaping Tanen Gard, The dragon drives the remaining Rat Creatures away from the Gran'ma Ben's army.

The Great Red Dragon appears near the end of the book after Big Johnson has left. He meets with Stillman, who says he agrees with The Dragon's decision to replace him as guardian of the forest. The Dragon reassures him that he can stay guardian because he got his flame back and all the animals were safe.

The Great Red Dragon is wise and has a slight trickster personality, showing that he keeps appearing unexpectedly and mysteriously. He is as tough as Gran'ma Ben and very clever, though he's not really a man of action.

The Great Red Dragon on the cover of Rose

The Great Red Dragon on the game Pic of Bone 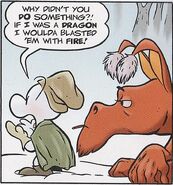 The Red dragon being question by Fone Bone 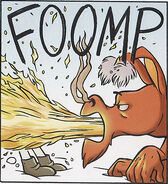 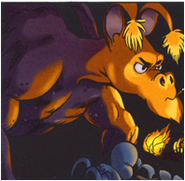 "Now who are you calling boy?"

Add a photo to this gallery
Retrieved from "https://boneville.fandom.com/wiki/The_Great_Red_Dragon?oldid=9642"
Community content is available under CC-BY-SA unless otherwise noted.